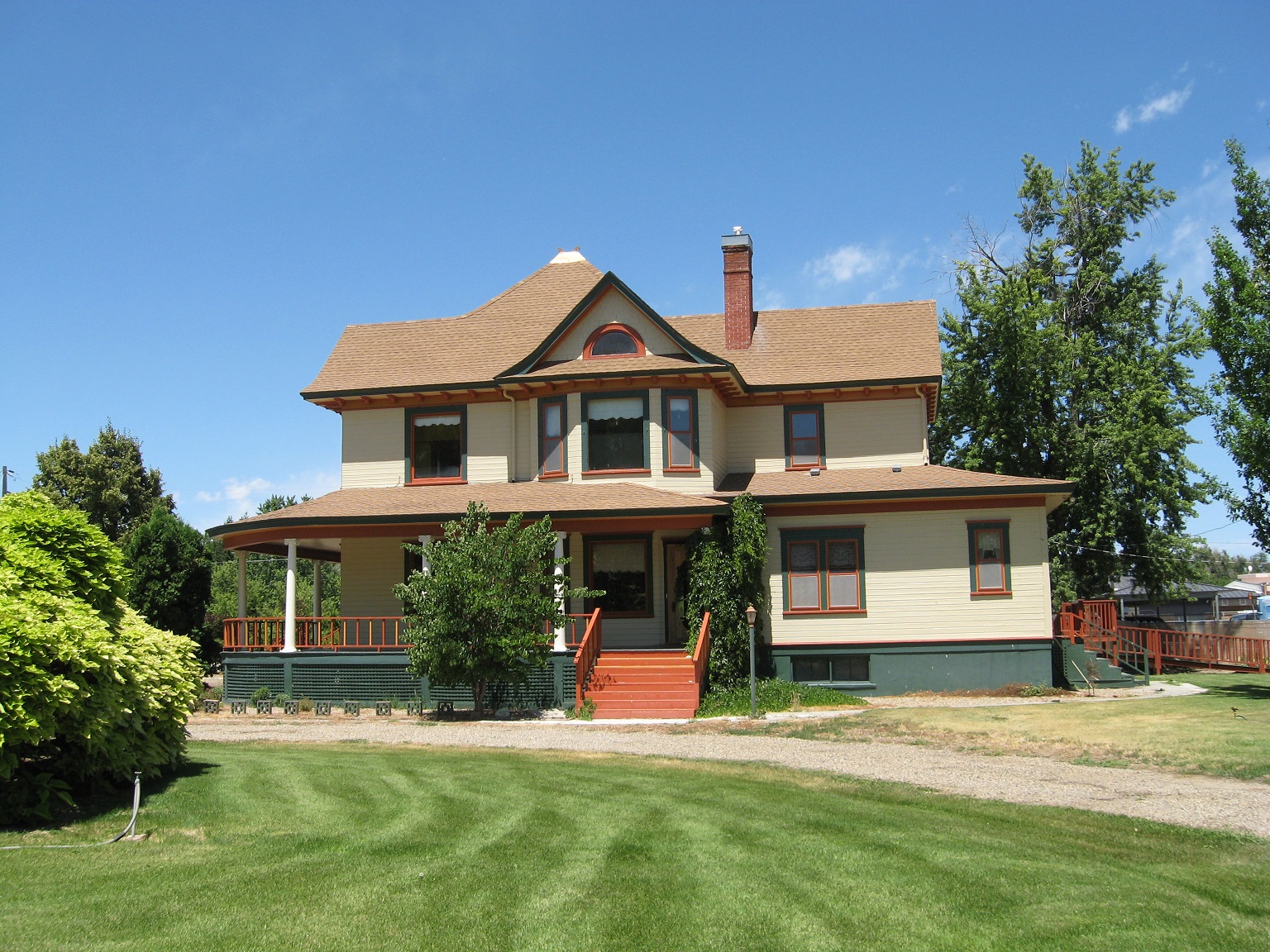 The Jacobsen house was built in 1908 by N.A. Jacobsen for $2500. Nicholas Adolf Jacobsen was a German immigrant.  Mr. Jacobsen was born at Kappein ad Schlei, Schleswig-Holstin, Germany, October 6, 1847. At the age of 25, he came to America and directly to Idaho. His first occupation was operating the old Washoe ferry, owned by Mr. Olds who also owned the ferry across the Snake river between Weiser and Huntington. Later he became engaged in the cattle business in the Payette valley, finding a market in the Boise Basin during the gold mining days. He also served as Pioneer Justice of the Peace.  Mr. Jacobsen is primarily responsible for the development of the fruit industry in this part of Idaho.  He planted the first prune orchard and shipped the first car of prunes from the Payette valley.

The house was his farmhouse on 100 acres that stretched from 11th Street to 21st Street (on the hill where the armory is) and Center Avenue to 3rd Avenue North. The original house colors were white with a red roof and blue trim around the windows. All the fir woodwork is intact with slight remodeling in the kitchen. There are original wood carvings in the house that were sent from Germany at N.A.'s behest. Ron and Charlee Marlow purchased the property in 1984. After Ron passed away in 2011, Payette County purchased the house and turned it into the Prosecutor's Office.

Prior to Ron's death, Wendy and Anne-Marie had the opportunity to visit with him. He loved the house and loved to tell the stories of its ghostly inhabitants. Ron told them of smelling the sweet smell of pipe smoke, a favorite past time of N.A. Jacobsen. He also said that Arma, N.A'.s wild child of a daughter, liked to make her presence known with the smell of her perfume. Wendy and Anne-Marie just smiled at the stories. However, years later and despite their refusal to believe in ghosts, the workers of the Prosecutor's Office had to admit to some strange occurrences. For example, Suzie's radio was many times found on the highest volume in the morning. Once, a former employee was in the kitchen doing dishes. When she started putting the clean ones away, she heard someone whispering behind her. When she turned around, thinking maybe it was Josh, there was no one there. That same employee reported the family picture on her desk was turned all the way around when no one had been at the office. Wendy has smelled the sweet pipe smoke, so strong it was as if somebody was outside her window. That same day, a public defender was at the office and stated that he could also smell sweet pipe smoke around the desks in the front office. Now, we still don't believe in ghosts but . . . The house did come complete with a one eyed cat, however, which sometimes makes if feel like Halloween everyday!

The house still boasts memorabilia from the turn of the century as well, including the original bill for N.A.'s funeral services and a dress swatch worn by Arma. Visitors, who were family members of the Jacobsens, stopped by and told how Arma was a Hollywood girl living in Payette. Apparently, she was the talk of the town! The ladies told the story of Annie's, N.A.'s wife, death. She was putting wood into the woodstove in the kitchen when her heart gave out and she took her last breath. They even shared a rumor about how the house left the Jacobsen family. Apparently, a family member who owned the house is believed to have been poisoned by her husband. Upon her death, the murderous spouse sold the historic home and left the area.

One of the best features of the house is the Catalpa tree that is planted in the front yard. It is said that buckets were hung on the branches to force it to grow downward, which accounts for its unusual appearance. Ron Marlow wrote a story from the viewpoint of the tree, which is shared below.

Do you have stories of the Jacobsen house you would like to share? We would love to hear them!

I'm just standing around on the circle driveway on First Avenue North in Payette. They say I'm a Bunji Catalpa tree. I provide shade for the little crocus flowers that bloom in the spring and wildlife that happens by. My branches are too fragile for the squirrels crows and magpies. The past three years I've bloomed fragrant clusters of little white bell shaped flowers. They smell as sweet as the blooms of the locust trees that were on the back lot. I don't know how old I am, but my roots were put in the ground before World War I. As I got older, buckets of dirt were hung on my branches to bring them to the ground. Youngsters were told that I was an upside down tree.

The other day, a couple came riding down First Avenue North on their bicycles and stopped to admire me. The man remarked that I was an odd looking tree, after which the lady added, "If the tree could only talk." Well, I'm talking!

N. A. Jacobsen bought this hundred acre farm owned the east side of Payette, Idaho, built a house in 1908 and planted me in the middle of this circle driveway. Later on you planted locust trees on the east side of the house and around the driveway. The trees closest to me were topped and trimmed in a ball shape. I thought to myself, "What good are they?" "They don't provide shade - just decoration and the Shasta daisies nearby are much prettier."

In 1915, N. A., (as he was called), bought a new Buick automobile with a cloth top. He drove around the driveway and stopped by the front door. Annie, his wife, came out to speak to him. He opened the front car door and motion for her to look at the driver's door. Across the top were the initials, N. A. J. He's taken a punch and punched his initials through the door's metal.

Annie never liked the big car so N. A. bought her a small electric car. In her buzzing around town she stepped on the accelerator petal instead of the brake and ran through the front window of a downtown shop. He never let her forget this accident. After a ribbing she'd shoo him out of the door with a broom. Tempers were smoothed over when he'd bring her a stick of candy from the downtown store.

The youngest of the Jacobsens, Arma, was a very pretty girl with dimples and long black hair that her mother put in ringlets. After high school Arma was sent to Europe to study millinery. Returning to New York, she married a stock broker and sold hats. They lived in the Waldorf-Astoria. Some scandal entered her life, so she got a divorce and came home.

A millinery sales wagon would come by the Jacobsen home in Payette once in a while. The salesman knew of Arma's experience with hats so they could always count on a big sale. While the salesmen were in the house, the little girls from next door, Arma's nieces, would sneak over, open the door of the truck and play with the large selection of hat samples. All this I know because I was there just standing around.

I remember one Christmas the Jacobsens went across the street, to their daughter's house, to celebrate with fruitcake and wine. Afterwards the old folks went to midnight mass. During the night a big ruckus occurred when some boys broke into the basement and found some left over wine which they proceeded to drink. Earlier in the evening they had found some beer and consumed it. By now they were sick and drunk. The sheriff picked up the boys and they confessed to the crime. The remaining wine was confiscated and Belle and John Sur were arrested. The fine was $800 which had to be paid off in installments. Afterwards I heard a loud discussion on the front porch about the Statewide Prohibition Statute of 1917.

I used to enjoy listening to Payette's Girl Scout Band as they paraded by on 11th Street. It was organized in 1925 by Jay Stoner and received worldwide attention in magazines. Their first concert was held in the Central School. Part way through the concert the fire alarm sounded. Soon the building was nothing but ashes. I could see the flames from my spot on the circle driveway. The new school was built in the next block and became McCain Middle School. I witnessed the top floor burning in 1956.

My pleasant memories go back to the time when C. F. Brodersen and Mr. Jacobsen would sit on a green bench under my branches and smoke their Meerschaum pipes. They reminisced about the old times in the homeland. If I'd understood the Danish language I'd have known what they were talking about. (Years later, the author, in digging in the ground under my branches, smell the strong aromatic aroma of pipe tobacco. No one was in sight - what a strange feeling!) Next thing I observed was a new, green bench under my branches. As far as I know no one came by to sit on it.

Arma and a friend, Lindsay, went to California and sampled the Hollywood nightlife. Movies were the up and coming thing with D. W. Griffith, Charlie Chaplin, Buster Keaton, Mary Marie Osborn and others. Norman Manning produced some movies and hired Arma Jacobsen to play some bit parts. Soon they were married. Her movie career spanned the years 1915 to 1917. Some were shown in Payette's Emma Theater. The glamour of Hollywood soon wore off. Her friend was killed in a car wreck - she got divorced and came home.

One morning Arma came out of the house all dressed up in her white, silk slacks and thin white blouse, on her way to town. She was quite a site with dark glasses, big floppy hat and a cigarette hanging from a fancy cigarette holder. A police car brought her home and, upon leading her out, the police chief was heard to remark "that she was a bit overwhelming for the citizens of Payette with her Hollywood look."

Arma's next husband was a stock broker from San Francisco. They lived on Nob Hill and had frequent visits from Payette relatives. Mr. Steele came with Arma to visit her folks. He convinced N. A. that he had an investment that would yield hundreds of dollars in profits. N. A. gave him $50,000. The market declined and all was lost. Arma divorce him and came home when her mother died.

I missed seeing Gorgeous George, the resident peacock, gallop across the lawn to look for grasshoppers in the vacant back lot. The police chief had a warrant out to catch him but conceded that "he was an elusive old bird." A pretty pheasant rooster used to stroll around on the back lawn and once in a while, a little cotton tail rabbit would come out of nowhere to hop around the driveway.

I'm getting older - my top leaves are getting lighter and I have to have wooden props for my branches. I gaze up at the sky and see the moving satellites. No more can we hear the mournful whistle of the Union Pacific's steam engine as the train winds its way through the valley. One is the clumpty-clump sound of an engine pumping water for the Shurtleff Orchards, north of town. Now it's all in the past. Times have changed. This old tree still has lots of life and lots of fond memories.